The American Chamber of Commerce in Singapore Community Day.
Together with United Technologies (UTC), it was a morning of kite making and flying for 50 children from Jamiyah Children's Home and the Salvation Army Haven Children's Home which was held at Pasir Ris Park.
U.S. Ambassador to Singapore Franklin L. Lavin graced the event.

Shakib, the story teller made an appearance with musical instruments and magic tricks. 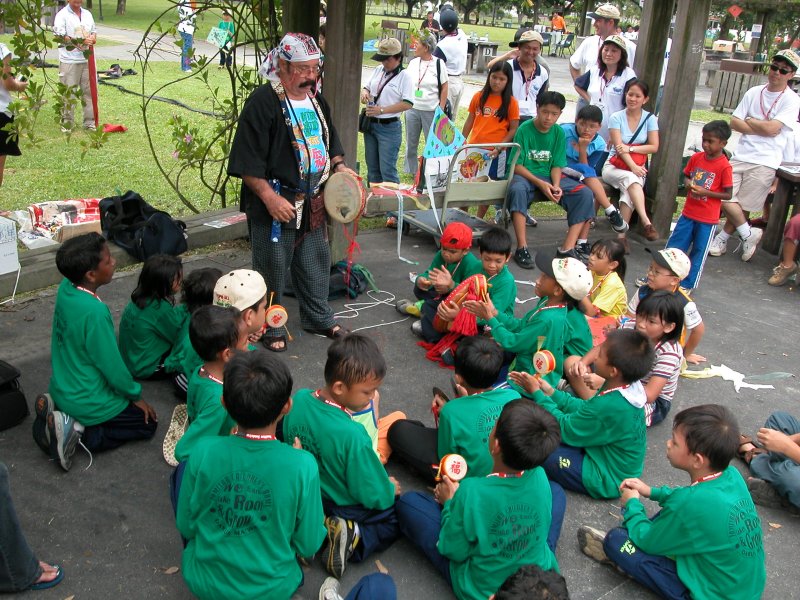 Attended by Peter, Stephanie and Gadis.

Here is the link to the photos for PORTUGAL

One of our members, who's also a founding member of the Singapore Kite Association hosted
a VSS Outdoor Social Activity (Vegetarian Society Singapore) at Marina South.  The event began
with story telling followed by flying of of miniature paper butterfly paper kites. 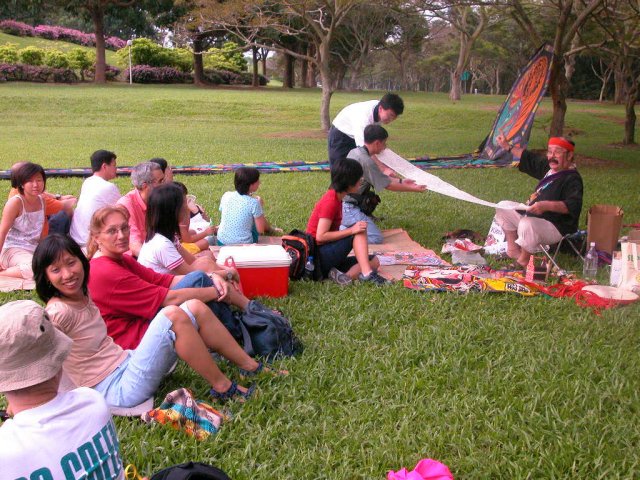 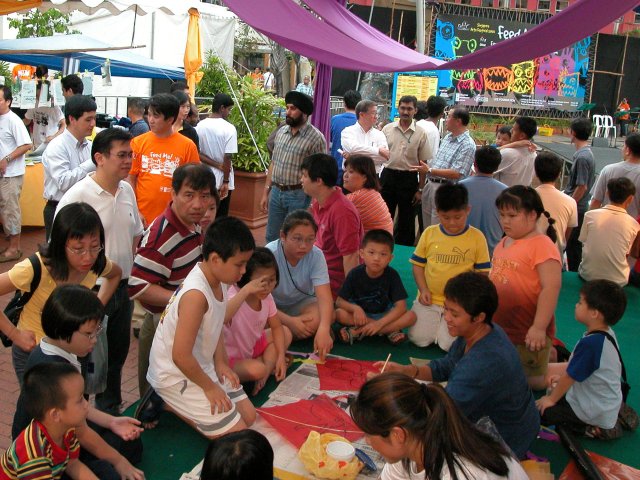 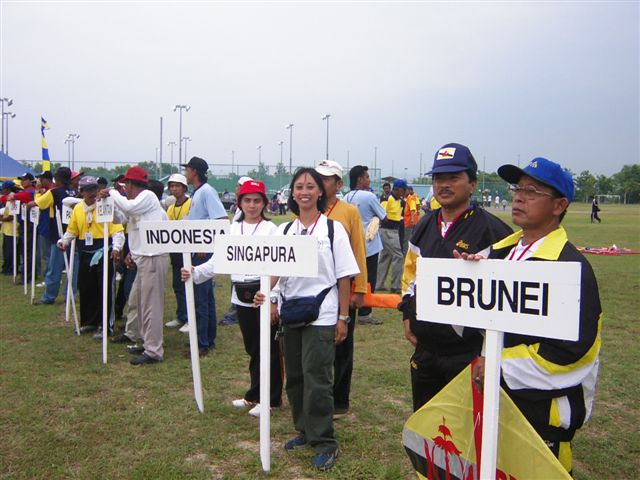 To celebrate the turning on of lights along the
promenade from Casuarina Cove to Costa Rhu, Tanjong
Rhu Neighbourhood Committee will hold a kite flying
display in conjunction with Singapore Kite
Association. To mark this waterside event, Singapore's
first ever merlion kite will be launched. Lights go on
at 7.15 pm. There will also be other activities.
Come on out and join us for an exciting evening by the river! 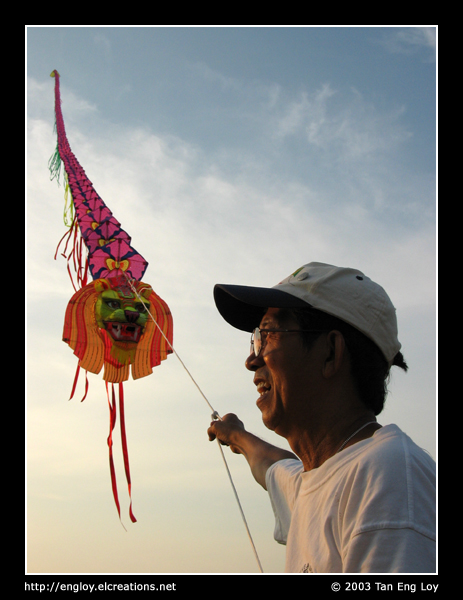 15 May 2003
Received official graphics from COIMBRA (Cultural Capital of Portugal)
International Kite Festival. This event is on 25-27 July 2003.

1 May 2003
Migrated the entire SKA website to a new location.
If you do not wish to see the popup ads, use the direct URL:

http://ska.askwing.com
Do drop me a mail if there is an improvement in speed, etc....

27 April 2003
The Merlion kite made it her first public appearance at Pasir Ris Park today.
We are now making adjustments to for the Merlion train to fly in strong wind.
Here are some pictures: 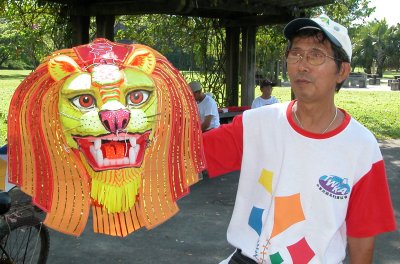 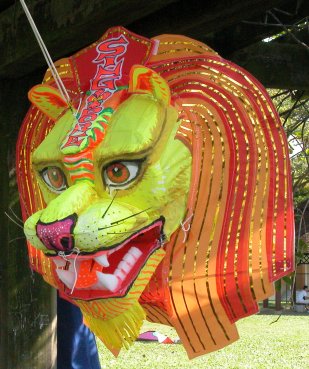 Closeup of the Merlion head 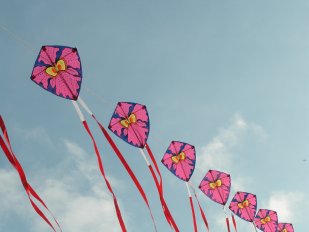 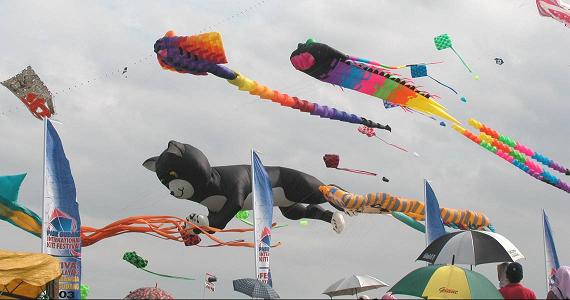 ...and presenting the Arch Kite (below) made by the Engels

16 February 2003
SKA Kite Day. Plenty of rain, many did not turn up due weather.
Merlion Kite slightly off schedule. However here is a panel for preview: 3 November 2002
CLEAN & GREEN WEEK CARNIVAL KITE WORKSHOP
In conjunction with the above celebration, SKA will be conduct a GREEN kite workshop at the CARNIVAL orgainsed by Singapore Environment Council 13 October 2002
One Sky, One World
Please visit this link 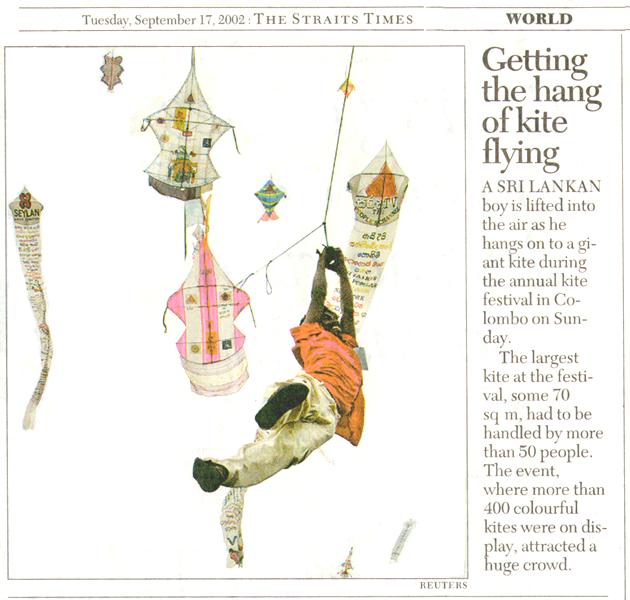 SKA team was at the SDBA's SINGAPORE DRAGON BOAT FESTIVAL 2002 to
fill the sky with dragons. Here are some pics. The Moving Visuals Company was at Pasir Ris Park kite filming for their new program Hobby TV
to be aired on KIDS CENTRAL for next 6 SATURDAYS 1:30-2:00 PM which premiered on 13 April 2002. Finally, the Turtle Edo was seen in the air for the FIRST time. Really Something, Episode 13 : Exit the dragon was aired on Channel i.

SKA officials inspected the proposed flying site for Dragon Kites by  the river at Marina
Promenade/Marina Bay. Dragon Kites will be flown at the
Singapore Dragon Boat Festival 2002 from 15 Jun 2002 to 16 June 2002.

Makan for Gary & Michelle from the Toronto Kite Fliers on their visit to Singapore.

On 8 March 2002, Two of our SKA Dragon Masters were interviewed for "ReallySomething" to
be featured in the last episode "Dragons"
So don't miss out Really Something on the second week in April. 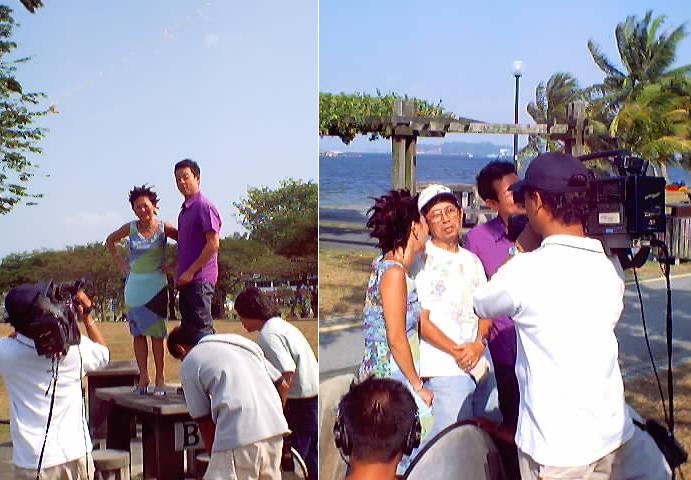 Yuwono Riyadi (left) and Veronica (right) holding on to the Kite while final adjustments
were made to the bridle before the madien flight.

Many visitors have requested that we elimiate the "_" or "underscore" in our URL.
Finally, we have another finger friendler URL :
http://colors.at/ska Thank you for the feedback.

The webmaster has just returned from Pasir Gudang.
While we wait for full report from the forthcoming newsletter, here is a picture...

Group photo of the Rokkaku warriors before the battle.

SKA Colourful Kites are on display at Singapore Handicraft Center, China Town Point
Podium B, SINGAPORE - from 7 Sep 2001 till 1 Oct 2001.

Started ASIAN KITE DIARY for recording of Kite Events in the ASIAN REGION.
Check out http://go.to/asiankite